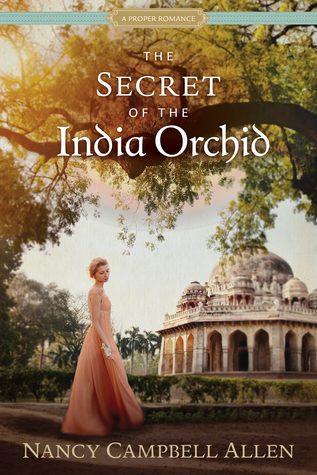 Anthony Blake is in love with his best friend’s sister, Sophia Elliot. But his plans to court her are put on hold when he is forced to resume his role as an undercover spy for the Crown. A secret document listing the names of the entire network of British spies-including his own-has been stolen. To protect Sophia, Anthony cuts off all ties to her and exchanges his life as an honorable earl for the façade of a flirtatious playboy.

Heartbroken and confused, Sophia travels to India, hoping to find healing in one of the most exotic regions of the British Empire. But the exotic land isn’t as restful as she had hoped. Instead, she finds herself embroiled in a mystery of a missing sea captain, a possible murder, and a plot that could involve the prince of India. And when Anthony appears at the British Residency, asking questions and keeping his distance from her, she is stunned.

She still loves him, and, in her heart, she knows he loves her too. But how can she rebuild her relationship with him if he won’t confide in her? Does she dare offer her heart to him a second time, or will their love be lost under the India sun?

I’m always looking for something different and exciting to read. So, when I heard about this book I just knew I had to read it! Especially when I learned that the story took place in India. I’m a big fan of India and its culture. Also when I had read Edenbrooke and Blackmoore I knew I had to read this novel!

This is a new author to me so that was another plus because I don’t really like to step out of my comfort zone as it concerns authors and genres. I did decide to give this novel a try.

This book started out pretty well and it had a solid beginning. It kept my interest for quite a while. In the middle it did seem to stray a bit and after a while the novel seemed to be filler instead of the story I was hoping for.

To me, it wasn’t memorable as I thought it would be and I began to feel very disappointed. I’ll give this author another chance though because I love to read regency fiction. (3 stars)

*I received a copy of this novel from the publisher. All opinions expressed are entirely my own.*